Why I Love Social Media - A Story About Jeremy Roenick

His accomplishments as a hockey player have been significant. Jeremy is one of only 4 US born players to have scored over 500 goals in their career, and he sits #36 all time on the goal scoring list. He is also #40 in career points for his career. These are amazing accomplishments, and are just a snapshot of the success Jeremy realized in the NHL.

I’ve always liked JR. He’s been outspoken, sometimes brash, he has strong opinions, and at times he’s been in some ‘hot water’ for some of the things he has said....but you always know where he stands. He's got his haters (if you were to do a Twitter search today, you would see he’s taking flack for recent comments he’s made) - but I'm not one of them. JR was not the athlete giving 'canned' responses when he was interviewed. I loved that.

Yesterday, I had the pleasure of exchanging some Tweets with JR, and what happened yesterday is a great example of why I love social media, and the tools we have today.

It started with looking at someone’s Twitter timeline, and clicking a few conversations that took me through to several Twitter profiles. Somehow, I ended up on JR’s profile. I was not following him at the time, and thought I would check out a few of the Tweets that he had sent recently.

At the top of his timeline, I saw this Tweet: 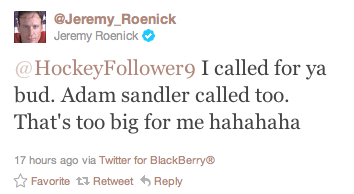 Seemed like an interesting Tweet, so I checked into the conversation that led to this post....his final response in the conversation. It started with this Tweet from a guy that was looking to win a pair of World Series tickets: 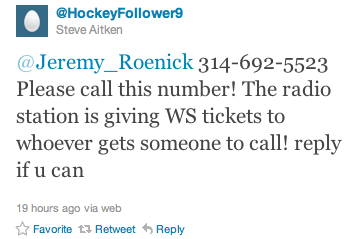 To which JR replies with:

The guy replies with his name, and then you saw JR's final response above. I hadn't read through all of the details on the conversation...just the details I could see readily in the Twitter feed. At this point I wasn't clear on the whole story, so I sent JR a message. To avoid any further "he said - then I said - then he said" explanations, I'll post the exchange in it's entirety below. 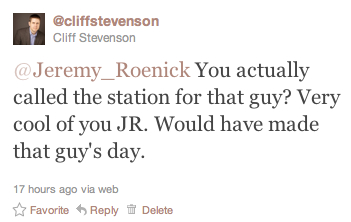 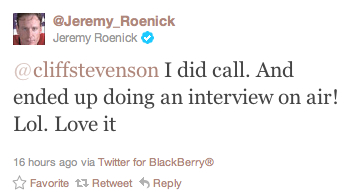 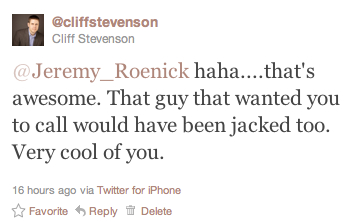 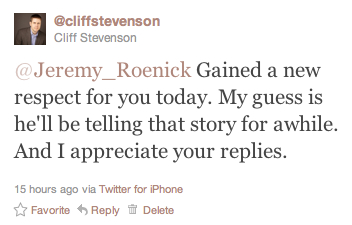 Jeremy Roenick has always had a reputation of being great with fans. If you Google his name, you'll see several references to the fact that he has always taken time out to talk with fans, sign autographs, and engage with people. Yesterday he took time out of his day (I'm sure he's a busy guy) to call a radio station for some 'random' guy on the internet, so that this guy might win World Series tickets. After that, he took time to reply to me and my inquiries on what took place.

This is why I love social media. We have access to people that we would never have had the chance to engage with just a short time ago. Our network for 'direct contact' has grown imeasurably. Reaching out to people you admire, respect, want to engage with, want to learn from, or want to help has become so easy. People invested in social media and using these tools have been provided with many very cool stories on the power of social media. I don't think this story speaks to it's power.....it's just a cool story (IMHO).

I'm a huge hockey fan....and a big fan of JR. So yeah, yesterday was kinda cool for me to have a brief exchange with someone I've cheered for over the years. But this guy....the @HockeyFollower9 guy? Tell me he's not telling this story everyday for the next year.

He's got JR to thank for that, and after reading the entire timeline after my exchange with JR, he was indeed thankful. 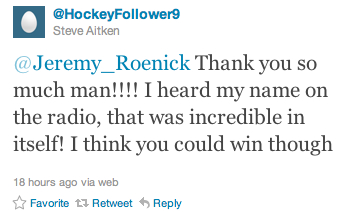